The latest (in a long series) of damning CQC reports concerning Southern Health NHS Trust (see press release here http://www.cqc.org.uk/content/southern-health-nhs-foundation-trust-still-not-doing-enough-protect-people-its-care ) was published this morning. Here are some quotes from this press release, from Paul Lelliott, Deputy Chief Inspector of Hospitals and Lead for Mental Health:

“Since the failings identified in the Mazars report, this Trust has, rightly, been under intense scrutiny. In December 2015 it introduced a new system for reporting and investigating incidents, including deaths. It is too early to gauge the effectiveness of the new process. However, our inspectors found that the quality of the incident reports and initial management assessments, conducted both before and after the introduction of the new procedures, varied considerably.“We found that in spite of the best efforts of the staff, the key risks and actions to address them were not driving the senior leadership or board agenda. It is clear that the Trust had still missed opportunities to learn from adverse incidents and to take action to reduce the chance of similar events happening in the future.I am concerned that the leadership of this Trust shows little evidence of being proactive in identifying risk to the people it cares for or of taking action to address that risk before concerns are raised by external bodies.”

The CQC’s remedy for this long-standing and dangerous continuing failure of leadership at the Trust? This:

“The Trust has supplied an action plan setting out the steps it will take to address the concerns identified in the warning notice and CQC will be monitoring the Trust closely with regards to its progress. A further inspection will take place in due course to check that the required improvements have been made and are being sustained.”

“We’ve read the Care Quality Commission’s report and it makes extremely disappointing reading.We recognise the seriousness of the situation at Southern Health and it’s clear that urgent improvement is needed at the trust.We’re currently considering whether to take any further regulatory action.” 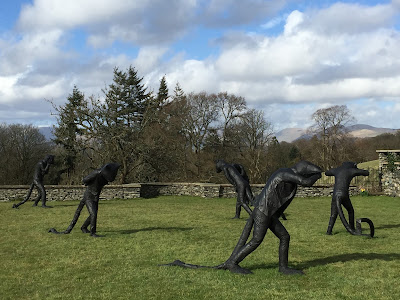 [The photo is of 'Days of Judgement', part of the brilliant, brilliant 'Seen and Unseen' exhibition by Laura Ford across the Abbot Hall Art Gallery and Blackwell House in the South Lakes]
Just so the CQC, NHS Improvement, the Department of Health, and anyone else on the accountability magic roundabout are clear about what the consequences of their continued non-participant observation are, this short blogpost goes through how Southern Health are reporting people’s deaths in their Board papers. It was prompted by a straightforward question from Mark Neary a couple of weeks ago – do we know how many people with learning disabilities using Southern Health services have died an unexpected death since the Mazars report was published? Over a sandwich, I thought I’d have a quick look. As ever (I should know better by now), I ended down a malignant rabbit hole of Southern Health Board paper reporting, whether nothing quite adds up and the overall effect is to obscure rather than illuminate.
Remember, the timescale for this reporting is recent – Southern Health must have had a draft of the Mazars report in the summer of 2015, and no end of lesson learning before that, so their reporting of deaths should be exemplary by this point.
This first graph below (from the Board papers for 27th October 2015) shows how Southern Health were reporting information on people dying – or ‘Minimising unexpected deaths (Quality account priority)’. This reports the number of people using Southern Health services (across all their services) who died an ‘unexpected death’ (the definition they use for ‘unexpected death’ is unclear) week by week. My reckoning is that Southern Health reported 103 unexpected deaths from April to September 2015. At this point (well after Mazars had started work) they don’t report in which areas of their services the unexpected deaths are happening. And although the definition states ‘all unexpected deaths are reported as a serious incident requiring investigation’ this isn’t apparent in other parts of the Board papers reporting on SIRIs, and the statistically spurious red line representing the ‘not bothering threshold’ (I’m claiming the copyright on this technical term) is drawn conveniently just above the maximum number of unexpected deaths in any one week (‘expected variation – no investigation required’).

This way of reporting deaths was judged to be inadequate, and a new ‘improved’ system for reporting deaths began on the 1st December 2015. In the Board papers across this time period, I couldn’t find any reporting at all of how many people died, unexpectedly or otherwise, in the last two months (October and November 2015) that the old reporting system was operating.
The new, ‘improved’ system produces graphs like the one below (from the 29 March 2016 Board meeting papers). This records the total number of deaths each month, and whether internal ‘review panels’ (heavily criticised in the #Mazars report) have happened or not. By my reckoning, there were 289 deaths in total from the 1st December 2015 to 21st March 2016.
Moving from reporting only unexpected deaths to total deaths is a perfectly defensible thing to do (some ‘expected’ deaths may well be preventable). However, there is now less information available than before. There is no reporting of how many of these deaths are classified as Serious Incidents Requiring Investigation (SIRIs), for example.
There is also no attempt to cross-check the new reporting system against the old one, to enable the Board to evaluate what impact changes to reporting systems and changes to investigation processes are having on the number of people dying, why they are dying, and what the Trust are doing to prevent preventable deaths. Why are the Trust saying that ‘No historical data…is available’? Do they not know how many of the people using their services died before December 2015? Or can’t they be bothered to work it out?

Elsewhere in the Board papers, there is a table with some more detail on how they report deaths. This does report how many people died in different areas of the Trust. So, from 1st December 2015 to 21st March 2016, 28 people using the learning disabilities service (this includes community-based services as well as inpatient services) died, and 2 people using their TQ21 social care service died. Beyond that, all this table reports is how many deaths were subject to the preliminary investigation stage within 48 hours. Nothing more meaningful (how many were recorded as SIRIs, for example) is reported here.

At a time when Southern Health know they’re being watched, specifically on how they report and investigate deaths in their service, the shoddiness of their reporting beggars belief. They replace an old, rubbish way of reporting deaths for an even worse way of reporting deaths. They ‘lose’ two months’ worth of information regarding deaths from Board and public view. They start from a Month Zero of death reporting in their new system, and can’t/won’t find any way to track what’s happening over a longer time period. What really matters to them (what gets counted in graphs and tables) is how many initial reviews get done in 48 hours, and nothing else.
How many people with learning disabilities using Southern Health Trust have died unexpected or preventable deaths since the Mazars report (the original prompt for me having a look at this stuff)? Has this improved or got worse over time? From these Board papers, we the public (and the Board itself) cannot begin to answer these questions.
We do know that pretty much since the Mazars report up until the 21st March 2016, 28 people using Southern Health learning disability services lost their lives. Regulatory ‘monitoring’ and ‘considering’ time (even if this is serious face considering) is long past – this Trust has dishonesty in its bones.
Posted by Chris Hatton at 04:00